This was a short session today as we had to end early for holiday festivities, and we were also testing out Fantasy Grounds (https://www.fantasygrounds.com/home/home.php) for the first time. We had a lot of technical hiccups, but overall, it was worth it, even for an in-person game. I highly recommend Fantasy Grounds as it makes administration for the players and DMs both easier and gameplay is smoother, once you get used to it.

We started with the party having just entered the Abyss, seemingly at Lolth's invitation. They found themselves among a maze of hallways, 20 feet wide. Fog formed the walls and ceilings and the floor was made of a smooth stone that appeared to have moving swirling patterns within. Closer examination revealed twisted bodies and tortured faces writhing around in anguish.

Walking along in one direction, the party came across what looked like an overpass. Shan-Ju pulled out a Rope of Climbing that he was able to use to climb up and the rest of the party followed suit. This brought them to another pattern of hallways which they followed for a while until they came to another overpass and repeated the same maneuver. Eventually, they came to an overpass 10 feet overhead and did it again, then eventually came to the same overpass. They realized they had been going in circles and, rather than go overhead again, they decided to go forward, following the hallways as it turned left and right. After about an hour, they came to a turn in the hallway where there was a door on their right and driders approaching from the other side.

The driders were dispatched quickly, and the party decided to enter the door. They found themselves in a very large, strange room. Everything seemed warped - curving up and away from them the further away it was. Above them on the ceiling was a table with a cloaked figure sitting on one end. The party could see that the room appears to a large sphere, and decided to walk forward, ultimately approaching the table, which felt right-side up. 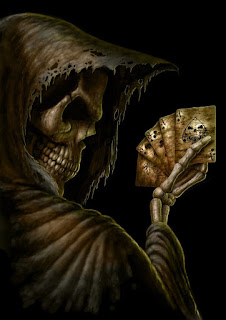 The cloaked figure at the end of the table was a skeleton holding a deck of cards. Seven chairs appeared around the table, and the party members decided to have a seat, with Sebastion asking "Who are you?"

The skeleton answered "I can answer questions you have, Sebastian Silvertongue. For each question you wish answered, you must draw a card." 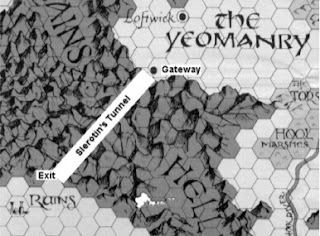 Sebastain was more than happy to participate. He asked "How do we find Lolth?" and then drew from the deck and disappeared (The Void).

The skeleton said "A question was asked and a card drawn. Lolth can be found in her Spider Ship, which is accessed from a door on the fourth level of the Demonweb. You are currently on the third level. To access the fourth level, you will need a key that you already have on you (it points to Sarril). To enter the ship, you will need a key that you still must obtain."

Shan-Ju then decided to ask a question. "Where is Slerotin's tunnel?" He then drew a card (Throne) and his Charisma was raised to 18 and he became aware of a new Monastery that belonged to him somewhere in the Flanaess.

The skeleton answered the question in great detail, explaining exactly how to find the tunnel, including looking for some ancient runes and how to activate those runes to reveal the tunnel.

Sarril decided to go next. "Why are some priests unable to commune with their gods? and he drew a card (Comet). He is now aware that if he single-handedly defeats the next monster encountered, he will be rewarded with power.

"There are two answers to your question, and I will provide you with both. The first answer is simply that many of the gods are now dead, though their worshippers do not know it, or refuse to believe it. The second answer is that a being of great power has discovered the secrets of the mists from the Domain of Dread, also known as Ravenloft. This being is using these mists to cut-off the connection between the Prime Material plane and the Outer Planes, thus limiting the connection between deities that exist in those planes, and their worshippers in the prime."

Seeing that things were going well, Dalron took a turn. "How do we defeat Lolth?" he asked, as he drew a card (Key). A treasure map then appeared in his backpack.

"You already have the tools you need to destroy Lolth. It won't be easy, but your best chance is for the paladin to use his holy sword against her directly. The rest of you should do everything you can to help make sure that happens."

Unfortunately, Dalron was disappointed in this answer as he had already planned on this strategy and was hoping there was some super-secret way to kill her that they were unaware of. But not this time. They would have to do things the old fashioned way.

At this point, the pressure was on. Everyone still had questions, but the risks were high. Everyone had seen their companion disappear and weren't sure what happened to him. Finally, Shan-Ju decided to ask the question on everyone's minds.

"How do we get Sebastian back?" he asked, then drew a card and disappeared (DonJon).

"To retrieve your friend, you must unmake the universe" came the answer.

And that ended the session. It is sometime, perhaps the 28th Day of Ready'reat, CY 580, somewhere in the 66th layer of the Abyss.

Game mechanics will be a mix of AD&D 1st and 2nd edition, plus some house rules (some inspired by, but not exactly duplicating 3e and 5...