The party rested in the dungeon below the hill giant's stronghold. Sarril had a rough night, being haunted by strange dreams of purple and green mists, tentacles and the feelings of insanity. In the morning, both Sarril and Luapan discovered that their connections to their respective gods is more difficult and prayers for spells took twice as long. Additionally, clerical healing spells seemed to be weakened (possibly other divine magics as well). 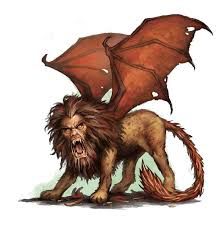 Once rested and healed up, the party decided to search the dungeons thoroughly, hoping to find another way out. In a previously unsearched room, they found a secret door leading to a hallway full of levers. Another secret door at the end of that hallway led to a large room with portcullis gates, which they assumed the levers controlled. Behind one of the portcullis gates were a pair of insane manticores which attacked the party with their spikes. Although the spikes don't do a lot of damage each, the two manticores were throwing 16 spikes per round, most of which were hitting Cadwin.

Pontus began carving the beast up for a trophy as the rest of the party searched the room beyond. Another room to the north appeared to have some chests within, guarded by two more manticores, calling for another brief fight. Once the maticores were dispatched, Pontus opened the chests, taking on the traps with his superior poison save. Dalron managed to recover some of the spikes and throw them right back at one of the manticores, killing it. As easy as that was, for some reason the party thought the best course of action to kill the other manticore would be to open the gate, causing the large beast to leap on top of Dalron and claw and bite at him. Fortunately, Dalron's superior armor class prevented the manticore from doing any damage and he was able to finish it off as well.

Sarril had earlier cast "Detect Traps," showing that two of the chests were trapped. Not having a thief who could disable traps, however, the party chose to have Pontus open the trapped chests, using his superior hit points and poison saves. The first trap was a blade on a spring that nearly severed a limb, but a lucky roll of the die meant he only took damage. The nest trap was a poison needle, which, thanks to his barbarian constitution, didn't manage to kill him. There were seven chests in all, filled with platinum, gold, electrum and silver coins as well as jewelry. All seven chests went into the portable hole.

Continuing to explore the area, and using Sarril's Find Traps spell to avoid several traps, the party was able to find another set of secret doors leading to another treasure room. This was turning out to be quite the lucrative adventure. In this other room, they found a map and a magical chain, with instructions written in the giant tongue. Since Dalron could read the giant's language, he was able to determine that the chain would transport up to 6 people to the Glacial Rift of the Frost Giant Jarl. Based on earlier documents found, it seems these frost giants were co-conspirators in the attacks on Sterich and Geoff. The party discussed this and decided not to immediately make the trip, but to finish searching the dungeon, specifically an area where the hallway had been intentionally blocked off. They first spoke to the orc slaves they previously freed, asking if they knew what was beyond the blocked off area and if they knew what the giants were searching for with all of the digging. Although the orcs could not say what the giants were looking for, they did say that a strange temple was uncovered on the other side of the wall and that troglodytes had been attacking and harassing them, hence why the tunnel was blocked. The party asked the orcs to help unseal the tunnel while they explore the other side, which the orcs only agreed to do if they could seal the tunnel behind them.

And so the party began exploring another area of the dungeon. They didn't get very far before they found the temple that was alluded to. Cadwin began feeling his way around and was immediately chilled by the cold walls. Pontus could see to the far side of the temple, behind an altar was a wall with shifting, amorphous/swirling purple and green hues that induced nausea to look at. Remembering a similar wall in a temple the party had found in some caves between Hommlet and the Temple of Elemental Evil, which nearly drove the barbarian insane, Pontus decided to leave the room rather than deal with anything inside. Cadwin, who became overwhelmed with nausea just by touching the walls, also decided it was best to leave. And so the party left, not even exploring the rest of the dungeon area, but clearing the blocked hallway and returning to safety on the other side.

It is worth mentioning at this time that the day was nearly over, and we had a new player in the group whose character was not yet introduced. The group was fairly confident that this player's character would be found somewhere in the dungeon and the player, who had grown impatient, blurted out a clue that led the party back to explore a cistern that they previously only partially investigated.

In the cave that held the cistern was an opening in the south and north wall. Water from a stream flowed from the north, into the cistern, which then overflowed to another stream that went out the south end of the cave. Cadwin had previously explored the south tunnel and part of the north tunnel, but this time decided to explore the north tunnel further, finding that it opened up into a large natural cavern with an underground river flowing through it. The stream that filled the cistern flowed from the larger river. The party decided to all crawl through the tunnel and explore the cavern beyond. The river flowed from the northeast, where another chamber of the cavern could be seen, but there was no way to walk there. Using a combination of levitate spells and spider climb spells, however, the party was able to make their way over the river and through.

On the other side, they saw a carrion crawler with a drow elf in its tentacles, about to eat it for dinner. 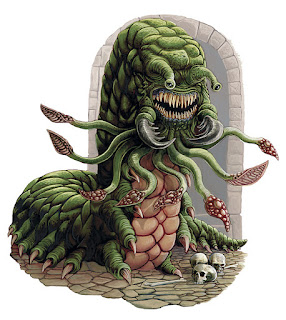 The party sprung into action, doing what they do best and killing the giant bug, freeing the paralyzed drow. Before they were safe, two more of the things popped up out of the ground, paralyzing Pontus before themselves being killed. The party decided to disarm and tie-up the elf before making camp to rest.

That night, the elf awoke during Sarril's watch. Sarril questioned him and he explained that his name was Bukro Shrazino from the hidden drow city of Ust Natha. He explained that he serves the wizards of Ust Natha, who do not worship Lolth, and was sent to spy on the noble houses of Erelhei-Cinlu - specifically House Eilservs, who seem to have tapped into some great unknown power. Unfortunately, Bukro was discovered, and inadvertently revealed (due to ESP) the location of Ust Natha, which was destroyed by magma a few months ago in what seemed like a natural disaster, but with suspicious timing. And Bukro was not the only one suspicious. There was one lone survivor from Ust Natha, a human sage who lived among the drow wizards who went by the name of Lucas. Lucas told Bukro that he suspects House Eilservs was behind the disaster, and that it was more important than ever that someone discover the secret to their power, which threatens both the underdark and the surface world. Lucas told Bukro that House Eilservs is orchestrating giants to attack the surface world as part of a larger unknown scheme. If he could find out the purpose of the giant attacks, it may lead him to some much needed answers. And so, Bukro came up from the underdark seeking the hill giant chief's stronghold when he was attacked by a carrion crawler.

The story was interesting, but it wasn't until Cadwin cast Detect Alignment to confirm that Bukro was not evil that the party decided to trust him. They invited him to join them as they share a quest to investigate the giant menace. Not wanting to travel into the underdark, and not wanting to explore the rest of the caves beyond the uncovered temple, the party decided it would be best to dig their way to the surface. Since another day had passed, the raging inferno upstairs was little more than smoldering ash. Using the Dig spell, Sarril was able to remove the collapsed rubble at the top of the stairs and make a path back to the surface. It was the first time that Bukro had ever seen sunlight, and it blinded him and burned his skin. Cadwin gave him a cloak and helped protect his exposed skin and his eyes eventually adjusted (for the most part).

It is the morning of the 5th Day of Brewfest and the Badass Motherfuckers are now a party of 6, standing in the foothills of the Jotens where the Steading of the Hill Giant Chief Nosnra once stood.
by Mike Breuker No comments:

Game mechanics will be a mix of AD&D 1st and 2nd edition, plus some house rules (some inspired by, but not exactly duplicating 3e and 5...